Meet the sanitation superheroes who’ve made clean toilets their mission

Three people have reduced health problems, cut school absenteeism and improved the safety of women in their communities with one powerful resource – a toilet. Find out how Domestos has helped them and over 16 million others gain access to good sanitation.

The restroom, WC, jakes, bog, dunny, loo or john. Those of us who have access to clean safe sanitation rarely give the toilet (or whatever name we choose to call this everyday convenience) a second thought. But for two in every three people around the world who don’t, it’s a pressing concern.

“Domestos is working to change that. We’ve worked with UNICEF and other partners since 2012 to support sanitation programmes that teach toilet-building skills, support women in promoting good hygiene practices and, crucially, improve access to toilets in schools,” says Madhusudhan Rao, Executive Vice President of Home and Hygiene.

Here’s how three people have used that empowerment to make a positive impact on their own and their community’s lives.

The community worker who built a toilet for her village

I’m glad my daughter will not have to face the same challenges as me and have to go outside to the toilet. Kolika, community worker

Women and girls have a greater need for privacy when going to the toilet than men. If they don’t have access to a toilet, usually the only option is to defecate in the open, which can impact their health. To avoid the unwanted attention, they’ll avoid going during daylight, which can lead to concerns for their safety.

“We were often ashamed,” admits local community worker Kolika, whom we helped enlist stone masons to build a WC for her village. “You can never be sure of people’s intentions,” she explains.

Having a toilet of their own has offered the women peace of mind for themselves and the next generation. “I’m glad my daughter will not have to face the same challenges as me and have to go outside to the toilet,” Kolika says.

She has high hopes of her daughter becoming a nurse, and access to a village toilet may help her daughter’s chances. A UNICEF and WaterAid study says more than a third of girls in South Asia miss classes each month during their period. Offering teens the ability to manage their periods in private increases girls’ continued school attendance.

It’s not just girl’s education that can be impacted. Health issues such as sickness and diarrhoea that result from poor sanitation can see children miss up to 20% of their schooling. Until recently 14-year-old Virendra (above centre) was one of them.

After seeing the difference a toilet made to his school and hearing from teachers about the importance of good hygiene habits to pupil health and wellbeing, Virendra and his sister began to lobby their parents for a toilet for the family. Now they don’t have to walk miles from home.

The headmaster who has seen sanitation’s impact on pupil performance 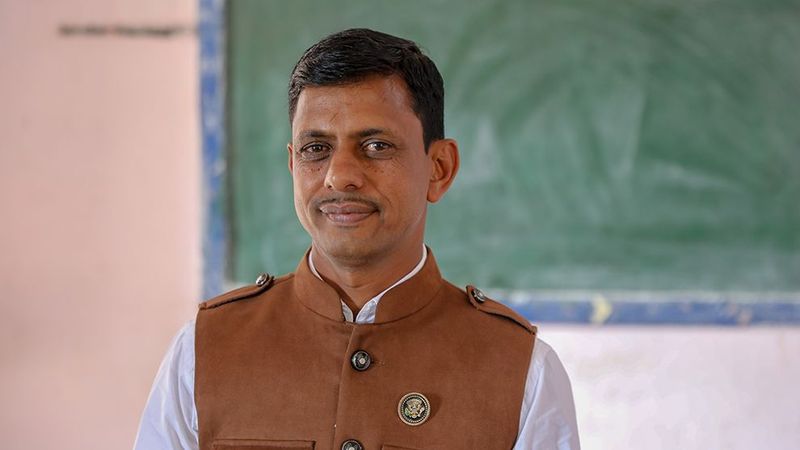 Pankaj is the headmaster of Goth Mahudi primary school in Rajasthan, India. “My vision is that all our children lead their lives in a better way, whatever that may be.”

Before the school had toilet facilities, attendance was low. “When the children relieved themselves in the open they would often get very sick and much of their time was spent in the hospital rather than at school learning,” he says.

With clean toilet facilities, attendance has risen and Pankaj and has noticed a difference in his pupils’ results. “Our teachers see a positive difference, with improved academic performance of the children,” he says.

Everyone should have a right to a clean toilet

“World Toilet Day is the one day when everyone wants to talk about toilets,” says Madhusudhan Rao. “So far, in partnership with UNICEF, we have helped over 16 million people gain access to sanitation and we will continue our work until everyone can take access to a clean safe toilet for granted,” he says.